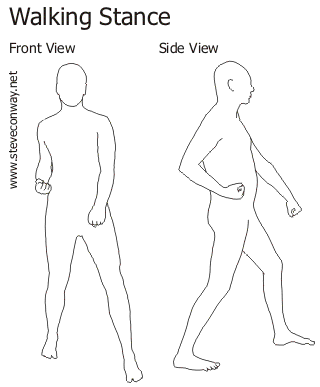 Again this is nearly always the first stance taught. Imagine that you are standing in a box which is as wide and deep as your shoulders.

Place your left foot forward to the top left corner of your box.

Place your right foot behind to the rear right corner of your box.

Keep your feet pointing forward so the effect is like being on tramlines, and bend your knees slightly. Your hips should be at around 45 degrees, while your shoulders should be facing the front. Your weight should be evenly distributed between your feet.

There are many possible positions for your hands in the stance, but we'll start with a basic sparring position. Hold your hands out as far as they go in front at shoulder height palm downs. Now rotate your hands so that your palms face each other and bend your elbows bring your hand towards your body. Position your left hand further out so that the line of your hands is similar to the line of your hips.

Moving forward, or back, consists of moving the rear foot to the front in a straight line (so like the feet are moving on tramlines).

The stance is easy to move into, in readiness of either an offensive or defensive move. The stance give a fair degree of stability as the rear leg is a brace against any forward pressure; however as the stance is neither low or wide it is not the most stable of the stances.