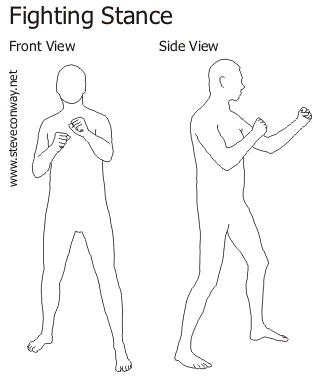 This is the position that you will usually adopt for sparring, or a general stance for practicing punches and blocks as well as rotating on the spot (180 and 360 degree spins). It is really a fundamental position for all fighting and self defense. It is not a specific Taekwondo stance but is used by most martial arts, kick boxing, and even boxing. In Taekwondo it is often used as a platform for kicks as Taekwondo focuses more on kicks than punches (after doing Kick boxing both myself and my daughter found it rather hard not to finish of techniques with a partner with a tasty punch to the head as we found several Taekwondo students tended to keep their hands low to block kicks rather than punches).

The stance is wider than walking stance, but not as wide as forward stance. Mine tends to be fairly close to walking stance, but the emphasis is on comfort, what feels right for you, since relaxed will tend to make it quick. Imagine a box shoulder width square.

Place your left foot forward to the top left corner of your box.

Place your right foot behind to the rear right corner of your box.

Now move your left foot forward around 100mm (4 inches) forward and your left foot around 100mm (4 inches) back. The trick is to find what feels quite comfortable, similarly with how much the right foot is rotated with respect to the left foot. The lower your stance the more stable you are, but on the other hand the more difficult it is to move. Being tall, and heavy (overweight) I tend to be quite upright and stiff (old), but then I have quite a reach (long legs). Complaining about what you don't have, wastes what you do have; well that's what the poster on the gym wall says.

In a sparring situation, there is a gentile moving of weight from front to back feet and a slight up down motion. This makes it easier to either move, perform a technique, or to do a dummy move.

Practice doing a straight front kick from both the left and right legs to get a feel. A straight front kick is done by raising you knee up as far as comfortable with either leg, all weight on the other leg; ignoring this will result in you falling over. Then kick out straight in front with the ball of your sole with all toes pulled back; ignoring this will result in breaking some toes, full of helpful advice this site. Coming back into the stance should be done quicker than the kick out.

In a sparring or self defense situation, front leg kicks are either "keep the opponent at a distance" kick (cos you are knackered), or the first of a series of techniques or kicks. Off the back leg, the same applies; although it is possible to land a decent forceful kick off the back leg. Particularly if you launch a pre-emptive strike.